A WANTED person moonlighting as a jeepney/tricycle barker-parking boy was arrested in a manhunt operation launched by elements of the City of San Fernando Police at vicinity Bgy Dolores, this City around 9:15pm of April 20, 2018.

The accused, identified as Roberto Guinto y Panganiban alias Take, 48, of Sampaloc, Dolores, this City, was nabbed on the strength of a Warrant of Arrest for Robbery with Force Upon Things issued by Hon Mary Jane B. Dacara-Buenaventura, Presiding Judge, Branch 43, Regional Trial Court, City of San Fernando, Pampanga.

Guinto, the leader of a Criminal Gang engaged in Robbery (Akyat-Bahay), Basag Kotse, Motornapping and Drug Pushing, masterminded the robbery breakin of the house of Catherine Mendoza-Manlapaz, 31, located at #24 Sampaloc, Bgy Dolores, this City around 2am of December 1, 2017.

The accused Guinto along with his cohorts, namely, Marko Masangke y Buthu alias Lupin, 31 of Bulaon Ressettlement, Bgy Bulaon and Orjil Macaspac y Bariga, 27, of Dolores Intersection, Bgy Dolores, both of this City, managed to steal away some Php180,000.00 cash money from the aforesaid robbery.

At the crime scene, however, one of the robbers left behind a pair of slippers, which turned out to be belonged to Macaspac as positively identified by a witness who saw him wearing it on that same day prior to the robbery.

The lead (pair of slippers) obtained by the City of San Fernando Police led to the arrest of Masangke and Macaspac some 10 hours later or at around 10am of December 1, 2017 at vicinity Dolores Intersection, this City, where the duo used to work as jeepney barker/parking boys. Guinto, at that time, remained at large.

Reports said that Masangke was on the run for some two years being the subject of a warrant of arrest for carnapping issued by presiding judge Mary Jane B. Dacara-Mendoza of Branch 43, Regional Trial Court, this city. 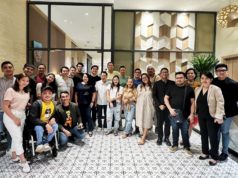 Enriching moments at the Summit-Greenhills for media from Cebu, Clark, Davao, Iloilo